I don’t know why it’s taken me two years to write this post, but here we go… 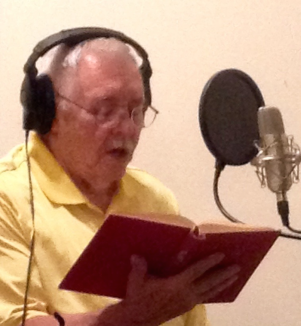 Just a little over two years ago, I had an opportunity to do something as a recording studio operator/ producer that a lot of guys don’t get the chance to do: I recorded my Dad.

It all started back in 2012… or, as I like to call it, the “year of change”. Many things happened in 2012 for me and my family: my wife opened a daycare in our home, my children became “homeschoolers”, I changed positions at my day job, and we changed churches.

One other significant change was the construction of my recording studio in the garage. It was quite a daunting task, and one that I could have never done all by myself. Fortunately I had the help and expertise of some good friends and especially my Dad. Having spent many years remodeling my folks’ old house in the country, Dad was invaluable in building and soundproofing walls, rerouting electrical wires, etc. It was during the process of building the studio that he and I discussed recording and music.

I grew up listening to my Dad sing in church. He was one of the main song leaders and, with his strong deep voice, he was everybody’s favorite leader. When he wasn’t leading, he would sit on our pew and sing bass, switching to tenor for at least one verse of every song. Sitting between him and my Mom (who would do the same thing singing soprano and alto), I couldn’t help but be influenced musically.

While we were working on the studio, he expressed interest in recording an album of traditional Christmas hymns as a gift for friends and family. He said he wanted to sing all the parts like I do on my albums, but he would need my help. Three years later, we finally did it.

Keep in mind, when Dad entered the studio to record for the very first time in his life, he was 77. He had never even heard his own recorded voice before! You wouldn’t know it by listening, though:

If you like very traditional sounding Christmas music, all a cappella, this CD (or download) needs to be in your collection. Get one for yourself and give one for Christmas to someone!